Which are the best cities in the post-Soviet space to be a Digital Nomad? Digital.Report compared a variety of statistics to pick the top five.

In a composite analysis of post-Soviet capitals, Digital.Report compared costs of living, visa requirements, internet connectivity, the ICT Development Index, the Ease of Doing Business, and street signage in English to rank the best cities in which Digital Nomads can live and work comfortably. And because we know how thirsty the Digital Nomad can get working remotely, we also factored in the cost of a half-litre of domestic beer.

The capital of Moldova was by far the most economical option of all places compared, (which is perhaps not surprising with its status as Europe’s poorest country). Yet, other perks, such as a more liberal visa regime than other countries, make Chișinău a relatively accessible option.

Living is certainly cheaper in Chișinău, by most accounts. A fibre optic internet connection in Chișinău with up to 100 Mpbs speeds costs just $11 a month from Moldtelecom. Likewise, monthly rent on a one-bedroom apartment averages but $195. A half-litre of beer will set you back a paltry 59¢ — no need to go thirsty here.

Moldova also ranked 53 for “Ease of Doing Business” according to the World Bank, and 61 on the ICT Development Index by the U.N. International Telecommunication Union in 2015.

While Chișinău dates back to 1420, the city was widely destroyed by an earthquake in 1940, and rebuilt in a Soviet architectural standard from 1950 onwards.

Note: Before you decide to move to Moldova, we advise you to find up-to-date information on the political situation there. As of January 2016, protests against the present government have been occurring since summer 2015. Likewise, mass surveillance is a growing concern in Moldova.

With 54 points, Tbilisi is a close second.

Not that any more reasons are really needed to love this historical gem of a city in the Caucasus, but Tbilisi might just be one of the best places in the former Soviet Union to be a Digital Nomad.

A fibre optic internet connection in Tbilisi with up to 100 Mpbs speeds costs $42 a month from Caucasus Online.

Georgia is the top ranking CIS country (24th out of 189 countries) in the World Bank’s “Ease of Doing Business” analysis – coming in 3rd for registering property, 6th for starting a business and 7th for getting credit.

Tbilisi also ranked among the top 10 least expensive cities worldwide for expats to live. A one-bedroom apartment can be found for $333, and a half litre of beer will set you back less than a dollar at just 82¢ (but we recommend the wine here). And with a generous visa-free regime for holders of passports from more than 50 citizenships (plus all EU states), Georgia can be very accessible for up to a yearlong stay without any additional documentation.

The capital of Ukraine offers the best rate on high-speed internet connectivity of all cities assessed, with a fibreoptic link offering speeds up to 100 Mpbs for just $8 a month from Ukrtelecom.

Costs of living in Kiev are also relatively low. A one-bedroom apartment rents for around $380 a month, whereas the beer is the cheapest among all countries compared at just 53¢ for a half-litre.

Kiev is fairly accessible to English-speakers, offering multilingual street signage. Ukraine also has visa-free regime for holders of passports from more than 50 citizenships, for up to a 90-day stay.

Note: Before you decide to move to Ukraine, we advise you to find up-to-date information on the political situation there.

The purposely-built capital of Kazakhstan, Astana ranks fourth on our list with 48 points. The glitzy new city rising out of the Kazakh plains is affordable, connected and a tad exotic located in the heart of Central Asia.

A fibre optic internet connection in Astana costs $14 a month with speeds up to 100 Mbps from Beeline. (A word of caution, however, what you might gain in affordable speed, you could also be giving up in terms of privacy.) Kazakhstan also ranked 53 on the ICT Development Index.

Astana is the second coldest capital in the world (after Ulaanbaatar in Mongolia). The cost of living is affordable, all things considered, and utilities are cheap (but heating is centrally controlled in apartment buildings). Monthly rent on a one-bedroom apartment averages at $443 and a half-litre of beer costs 90¢. If you get a chance, choose travelling with Air Astana for a pleasant and comfortable journey.

By 2016, Astana has pledged to post all street signs in English.

There is no doubt, Moscow is one of the most exciting cities of those we compared. And with 46 points, Moscow ranks fifth on our list.

The cost of living, while higher than much of the former Soviet space, is still affordable when coming from the west. A 1-bedroom apartment runs around $935 per month and a half-litre of beer just 99¢ (but vodka might be better!) A fibre optic internet connection in Moscow with up to 100 Mpbs speeds costs just $10 a month from Beeline.

Russia ranks 51 in the world for its ease of doing business and 42 on the ICT Development Index.

While the visa process for Russia is less fun, Moscow is fairly navigable for an English speaker, with considerable street signage and many people speaking the language. 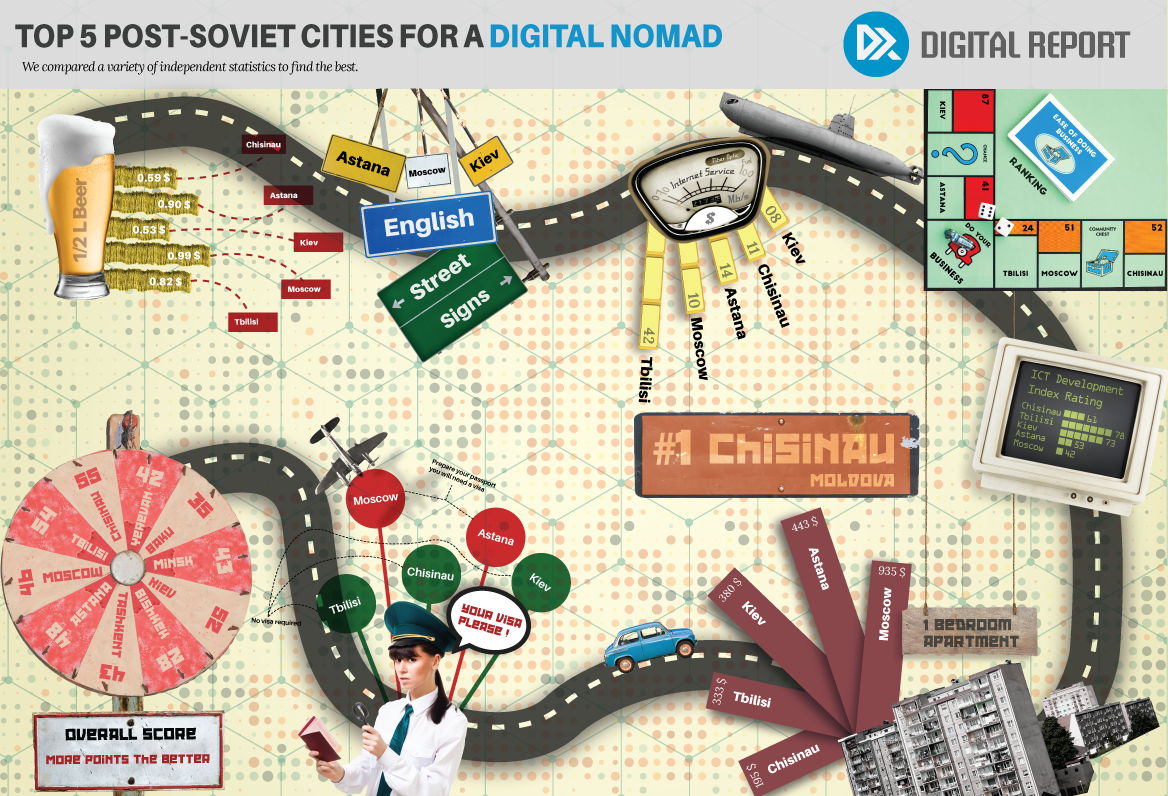 How Other Cities Ranked:

* Only cities with complete data sets were compared.

Share via
Top 5 Post-Soviet Cities for a Digital Nomad
https://digital.report/top-5-post-soviet-cities-for-a-digital-nomad/