As Russia has become more wired, Internet use in Russia grew from 19% in 2003 to 62% by 2013, the Russian government has taken an increasingly active approach in Internet regulation, both within Russia and on the world stage. Russia seeks a leading role in developing an alternate view of the Internet: a view in which the state exerts far more control over online content and infrastructure within its physical borders than is currently accepted in the majority of countries. The rhetoric behind such regime of governance privileges preservation of domestic cultures and national security.

When read together, the documents shed light on the motivations behind Russia’s moves in Internet regulation, both domestically and internationally, as well as the results. A reader can gain understanding how public opinion and policy are intertwined. In the case of Russian Internet policy, the average Russian citizen places a high value on security and trusts the state authorities to provide it. This is clearly reflected in Russian Internet regulation, both internally and externally. However, the reader is also left with the question of how active the Russian government is in the shaping and forming of that same opinion. 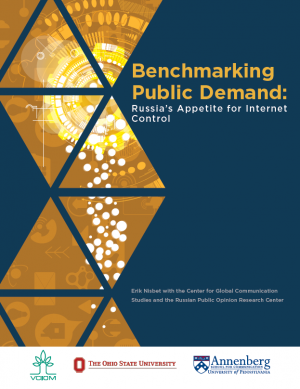 The Russian Public Opinion Research Center (VCIOM) conducted a poll on the Russian population’s opinion on Internet control. This is particularly important for Western individuals and organisations to understand in order to gain greater insight into the thought processes that create Russian policy.

The main findings of this might surprise the average Western reader. Russian public opinion largely supports increased Internet censorship. Public opinion is generally warm to the idea that the Internet can act as a destabilizing influence and that copyrighted material, foreign news media, and foreign websites should be censored. Poll participants primarily trust the Russian security services, the President of Russia, and the Russian Government to regulate the Internet, in that order.

Heavy Internet users, those who used the Internet on a daily basis, tended to desire greater access to information and be less trustworthy of the government as a whole. This does not suggest that heavy Internet users are inherently anti-state or strongly anti-censorship, but rather that their views tend to be more nuanced than light- or non-users. 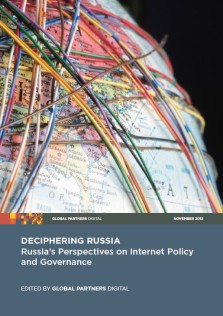 Internet governance manifests itself both nationally and globally. Thus, Russia’s stated national aims are codified into law within the country, while also reflected in international governance proposals. President Vladimir Putin’s post-2012 turn towards Russian exceptionalism and the increased emphasis on ethics and Orthodox culture have led towards an increase in online censorship in recent years.

The two most widely-discussed Russian laws in the West are the Internet Blacklist and online child-protection initiatives. In both cases, creators of the laws note their importance in keeping harmful information from society, and particularly from children. Citing that Western morals, or lack thereof, are poisoning Russian society, Russian citizens largely support these laws. However, critics note the lack of transparency and selective focus in their implementation. Other laws attempt to combat the problem of cyber crime in Russia. As in the West, Russia also faces the challenge of balancing intellectual property rights with access to information.

Internationally, the Russian Federation aligns with like-minded countries in the Shanghai Cooperation Organisation and prioritises countering the ‘three evils:’ extremism, separatism, and terrorism. In order to achieve this, Russia differs from Western views on Internet governance primarily through emphasising state sovereignty above all else. This requires a focus on content, something that Russia securitises to a greater extent than the West. Author Daniel Kennedy notes this is clearly visible in the respective linguistic titles that both languages employ: the English term “cyber security” vs. the Russian “information security.”

The Bottom Line: How Do Public Opinion and Internet Policy Fit Together in Russia?

At first glance, Russian policy is responsive to public opinion. The average Russian citizen supports significant state involvement in determining what is and what is not accessible online. This ranges from the ethical and moral spheres (homosexual pornography), methods for destabilizing the Russian government (“subversive” social networks), or unwanted criticism (Pussy Riot).

However, stopping here would be disingenuous. In addition to asking whether or not the public supports greater Internet regulation, we must also ask how the public came to this opinion. As Gregory Asmolov states in a companion piece to the VCIOM survey, public opinion is largely formed on television in Russia, and television is not a free media space.

“Officials keen on regulation can be instrumental—together with allies in society—in fostering the sense of peril and fomenting insecurity. By so shaping the background, public opinion is channeled towards favoring repressive tendencies.”

In this case, the Russian government acts as both a driver of and reaction to public opinion. This argument does not discount the opinions of the citizenry on Internet regulation and accessibility of information, but emphasizes the influence the government has in shaping that opinion.

Without acknowledging Russian public opinion, Western institutions and organizations cannot engage with Russia. If there is no understanding that general support for current policies of Internet regulation exists, there can be no dialogue. Only by accepting this fact can organisations truly engage with their Russian counterparts. Conversely, observers should not view the Russian government as simply reflecting the will of the population. Admittedly, Russian policy does reflect popular opinion, but the government also plays a key role shaping that same opinion.