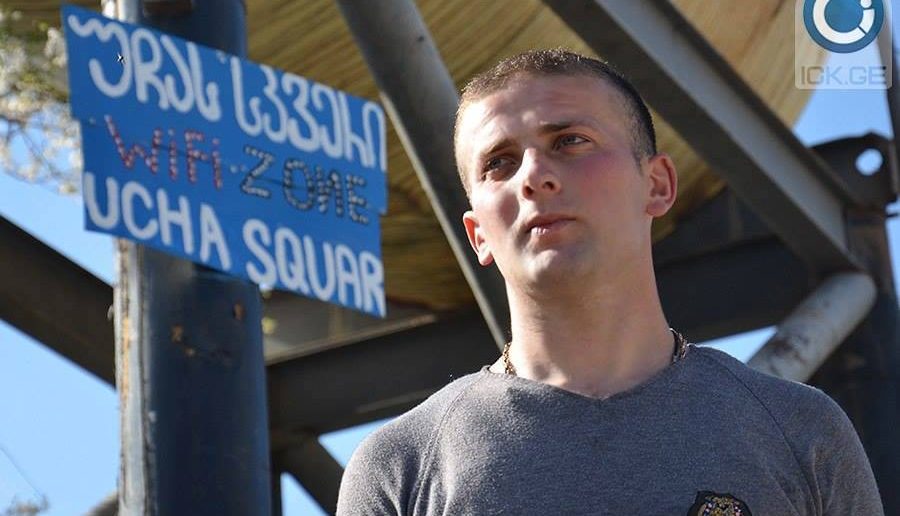 In Georgia, it isn’t just the telecommunications giants building the internet. Sometimes creative solutions are needed in this small mountainous country in the Caucasus. The story of Ucha Kemashvili from Chumlakhi village is one such example. For months, the 25-year old spent part of his salary to equip the village square with free Wi-Fi so people could browse the Web. Now villagers, young and old, gather here daily to watch movies or catch up on the latest news.

With a population of fewer than five thousand people, Chumlakhi sits 100 km away from Tbilisi, the nation’s capital. The village has Internet access, but most inhabitants can’t afford the $15 monthly fee. Three years ago, while still employed, Ucha Kemashvili could afford Internet at home. He didn’t password protect his connection, providing open access to the Web. Outside his house, Ucha set up a table, refinished broken benches, and turned an unkempt area into a cozy little gathering spot. Free high-speed Internet access together with the neighborly atmosphere quickly drew the villagers in – every night, the place would fill up with locals. Soon, the area became known as Ucha’s Square.

“There is nowhere to have fun in the village, not even a stadium. I appealed to the authorities several times, and they promised to do something but never did,” explains the young philanthropist. “My square is the only place where people can enjoy themselves,”

People use the Internet in different ways in Ucha’s Square. Teachers prepare their lectures; school children look up information for their homework. Some people play online games, while others read or use social media.

“It’s great that our village has young people like Ucha,” exclaims one of the villagers.   “We, the older generation, also like to come here at the end of the working day to relax – watch a film or just read the news,”

Every month, $20 from Ucha’s salary would go towards the square: building a street curb, refreshing the paint, or planting trees. Now it has the appearance of an official municipal park with a Wi-Fi sign on a street pole and a stand with the latest village news nailed to a tree. Ucha even added security measures installing a camera overlooking the square high up on a pole.

“Smoking is allowed, but not drinking,” Ucha explains. “I make sure people don’t litter or break anything here.”

The Square’s capacity is limited, as it only allows eight people at a time. The problem, says Ucha, is that the demand is much higher than the number of seats. People often connect to Wi-Fi directly from their cars parked beside the Square. The young man wants to expand the area, but doesn’t have the resources for it yet. After Ucha lost his job, it has become increasingly difficult to even cover the $15 Internet access fee, but the optimistic activist is not planning on giving up just yet:

“I lost my job, and haven’t found a new one yet, but I still try to find money here and there every month to pay for the Internet, People have already gotten used to the Square, they need it. I have a few other ideas for my village, so that the youth could both work and have fun here, without having to leave for the city – but I haven’t yet found the money to implement these as well.”

Internet penetration rates in Georgia reached 50 per cent of the total population last year (compared to rates nearing 90 per cent in countries such as Canada and the United Kingdom.) While penetration rates are increasing in Georgia, the cost of internet services remains high, and the speed of connection is still quite low, especially in rural areas.

Yana Israelyan is a journalist and producer based in Tbilisi, Georgia, who covers digital developments across the Caucasus for Digital.Report.

Share via
How a 25-Year-Old Brought Free Wi-fi to his Georgian Village
https://digital.report/how-a-25-year-old-brought-free-wi-fi-to-his-georgian-village/