In environments where restrictions confine the public sphere, the Internet has increasingly  become a platform for political activism and expression. Opposition leaders and disenchanted citizens take to blogs and social media to express their frustrations, connect with like-minded people, organize into networks, propose alternatives, and, importantly, to cross the online-offline  divide periodically.

A thriving blogosphere has become the new public commons

Across the region, the widespread  uptake of Web 2.0 resources, in particular Live Journal, Twitter, and Facebook, have redefined the culture of political activism. A thriving blogosphere has become the new public commons, where people of all political stripes are able to voice their opinions and find support. The upsurge in online political activity in the region, though rooted in domestic concerns, is part of a global trend, and has unfolded at the same time as the Arab Spring. This does not necessarily imply a direct linkage or influence of one region on another, but rather points to the power of the online space to facilitate popular opposition by providing a set of easily accessible tools to disseminate information and organize movements.

One of the most powerful  examples of online activism took place in Russia during  the 2011 Duma Elections, as smartphone-wielding individuals posted videos showing evidence of voter fraud. From mid-December 2011 to early May 2012,  the movement sparked the largest political protests in modern Russia’s history, including rallies of up to 120,000 people on several occasions.  During this period, activists used social media to propagate, coordinate, and cover the movement.  Like the protesters in the Arab Spring, which had just preceded  it, citizens for the first time had the power to document and publicize infractions themselves.  This was completely uncharted territory in the former Soviet Union.

While these election protests are the most commonly  cited example, there are many other incidents in which the impact of an individual armed with a smartphone and camera has greatly contributed to change in the region. In recent years, netizens have provided  riveting footage of the 2013-14 Euromaidan events in Ukraine, organized protests in Belarus, disseminated footage of prison abuse in Georgia that led to a major loss of popular support for the governing coalition, and provided footage of unrest in miner protests in Kazakhstan. In each case, citizens’ ability to record events, disseminate content, and network with other like-minded individuals enabled activists to reach far more people than ever before.

Other Web 2.0 resources have been deployed  to great effect throughout the region. The user-centric platform Ushahidi, which posts citizen-uploaded  text, pictures, and video and plots them on a live map, has been used across the region to document human-rights violations. For example,  in early December 2010,  two weeks before the Belarusian presidential elections, activists set up the site Electby.org, based on Ushahidi, to document electoral violations. In Kyrgyzstan, activists set up a similar system to monitor instances of torture across the country.

All of the Eurasian countries rank poorly on the Press Freedom Index, a measure by Reporters Without Borders that reflects mass-media freedom and editorial independence. (See Table 4.) None of the region’s national legal frameworks provide for official media censorship, or that of Internet content specifically, instead relying on unofficial  pressures and a culture of self-censorship to maintain control over the narrative. In most Eurasian countries,  the Internet is not considered  mass media, and is therefore not subject to the same laws, restrictions, and quality controls as official mass media outlets. However,  governments in the region have increasingly been moving to change this so that Internet content falls within the ambit of mass media. This trend includes not only editorial  content, but also user-generated content, such as user comments or social-media  posts. This opens up new avenues for states to exercise legal control over discourse, raising especially serious concerns in countries where press freedom is already limited.

In most of Eurasia major mainstream media, which profoundly affect public opinion and electoral outcomes, are owned by, or at the very least heavily influenced by, national governments, leaving little room for oppositional  views. This makes the online space a highly appealing destination for challenging the political mainstream and organizing opposition. The role of the Internet in political contestation varies greatly across Eurasia, depending on an array of factors such as the level of press freedom, Internet penetration, socio-economic development, and political culture in each nation.

Governments have stepped up their efforts to control online dissent

As the voice of Internet activism grows louder across the region, governments have stepped up their efforts to control online dissent, setting in motion a kind of tug of war in which, as activists add to their cyber toolkit, authorities respond with an ongoing counteroffensive, developing newer and cleverer means to limit dissent online.

The limits that the governments can put on online content can be broken into three generations of controls.15  First-generation controls focus on denying access to specific Internet resources by blocking access to servers, domains, keywords, and IP addresses. This type of filtering is usually achieved by the use of specialized software or by entering instructions manually into routers at key Internet choke points. It is relatively easy for observers to detect and expose (Deibert, Ronald, and Rafal Rohozinski. «Control and Subversion in Russian Cyberspace .» In Access Controlled: The Shaping of Power, Rights, and Rule in Cyberspace . Cambridge, MA: MIT Press, 2010).

Second-generation controls create a legal and normative environment for online controls that are enforced with technical capabilities  that enable governments to deny access to information resources as needed. Second-generation controls operate in both overt and covert modes. The overt mode legalizes content controls, typically by invoking the need for information security, as well as the broad application of defamation or slander laws to the online environment. The covert mode establishes capabilities  that allow technical controls to be applied “just in time” — for example, during elections or public demonstrations — and that allow plausible deniability.  Governments often point to legitimate security concerns as a reason for implementing  these sorts of measures.

The three generations  of controls are not mutually exclusive and can exist concurrently. Taken together, they form a pattern of control that is both unique to each country and generalizable to the region as a whole. The degree to which a country is more or less authoritarian  does seem to influence the generation  of controls applied, with the “more democratic”  countries generally preferring more subtle and sophisticated means of control such as counterinformation campaigns.

In Russia, following the wave of 2011-2012 protests, the government launched an extensive legislative program to regulate Internet content, justifying the use of advanced online filtering technologies and the policing of cyberspace by invoking concerns over security and morality. Recent Internet laws have increased the authorities’ ability to regulate online content.

As noted above, Russia passed  the so-called  Blacklist Law in 2010,  which limits access to materials deemed harmful to children, such as pornography and content promoting drugs. In 2013,  Russia passed an amendment commonly referred to as the “anti-gay propaganda” rule, that adds “propagation of the negation of traditional family values” to the list of banned content. A year before, Russian legislators had also criminalized libel, particularly against government officials and judges, a move that opens up more legal avenues for putting pressure on activists, bloggers, and individual journalists, as well as media outlets.

Another law, signed by Russian President Vladimir  Putin in May 2014 and popularly  termed the Bloggers’ Law, requires bloggers with a daily readership of more than 3,000 people to register their name and e-mail address with authorities. These bloggers are now considered members of the mass media, mean- ing that rules on libel, extremism, and the authenticity of published information will apply to them. First-time fines for not adhering to the regulations cost up to $1,000 but could ultimately reach up to $142,000 if the law is actively enforced. 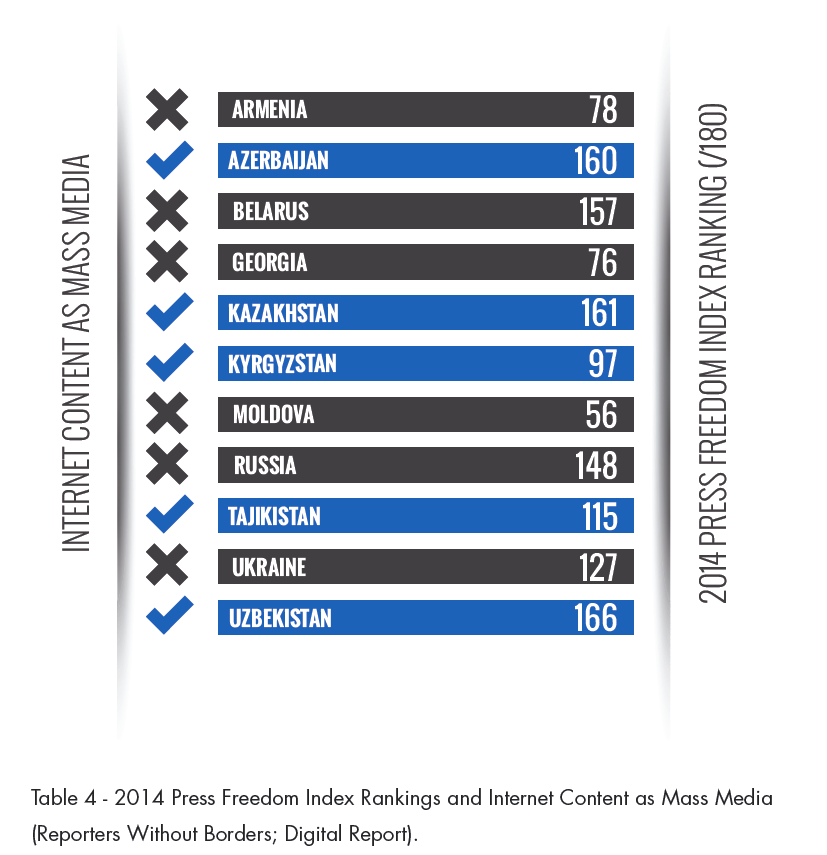 This initiative  is part of a general trend in the former Soviet Union to redefine  the Internet as a part of the mass media – a sobering development, given that mass-media freedoms are quite limited throughout the region, where journalists and bloggers are subjected to repression from both state and non-state actors. As in Russia, the intent of these changes is to ensure that all content is subject to the same restrictions as mass media; websites and blogs are responsible not only for their own work, but also for comments by readers.

The Shanghai Cooperation Organization  (SCO), a political, economic, and military organization comprised of China, Kazakhstan, Kyrgyzstan, Russia, Tajikistan, and Uzbekistan, invokes the need to combat the “Three Evils” to target political opponents and stifle online dissent. Defined as terrorism, separatism, and religious extremism, the “evils” represent legitimate threats, but SCO countries often conflate political dissent with these threats. For example,  the Russian government blocked an opposition news website, Grani.Ru, saying that it contained “incitement to illegal activity and participation in public events held in violation of the established order.” This turn of events is particularly troubling in Russia, where the 2013 amendments to the country’s 2006 law “About information, information technology and the protection of information” create a legal environment that allows website blocking with no oversight.

Similarly, other governments in the region have moved to expand authorities’ powers of control online. In Belarus, Decree No. 60 aims to “protect the rights of Belarusian citizens, the society and the state in the field of information, to improve the quality of Internet services and make them cheaper, and to encourage further growth of the national segment of the Internet network.” (By National Segment of the Internet, the Decree is referring to “the set of informational networks, systems and resources, connected to the Internet and geographically  situated on the territory of the Republic of Belarus and (or) using domain  names within the national domain zone segment”). In practice,  the document vastly expands the authorities’ control over the Internet. For example,  it requires  ISPs to block access to politically sensitive information accessible through state institutions and allow website blockage  upon requests from individuals, and requires that all legal entities and Internet retailers in Belarus be registered in the .by domain and use Belarusian hosting services — a move that gives Belarusian officials greater control over Internet portals.

Meanwhile, governments throughout post-Soviet Eurasia have enhanced online surveillance measures. Belarus, Azerbaijan, and Kazakhstan engage in the close monitoring of cybercafés. Belarusian Internet cafes are required to log users’ browsing  history for one year and to inform law enforcement bodies of suspicious activities, while Azerbaijan often closes or limits access to cybercafés in times of unrest.

Kazakh cybercafés must retain their customers’ browsing  history and employ video and surveillance equipment; users must present official ID to use the facilities. It is widely believed that Russia employs  large numbers of bloggers and citizens to produce  content that supports the government line, flooding comment sections, social media, and mass media with pro-government posts.

Eurasian states are also working to expose the identities of online activists, and acting to intimidate them, both online and off. For example,  in Belarus’s 2010 presidential elections, authorities enacted a swift and comprehensive crackdown on Internet-based media. For the first time, spoofed  websites were used to expose activists’ identities and to sow misinformation. Meanwhile, private-sector ISPs are also becoming more involved in the monitoring of citizens. The advent of Deep  Packet Inspection  (DPI) technology allows ISPs both to block specific sections of sites, opening up the possibility that governments will pressure  ISPs to block content such as politically  sensitive YouTube posts.

DPI technology also allows to ISPs to monitor users more closely, a capability authoritarian governments will be keen to exploit. Finally, Western companies,  such as Booz Allen Hamilton in Azerbaijan, have allegedly participated in uncovering the real identities of individuals online through a method called “astroturfing.”