Earlier in the Digital Eurasia:
The down of digital politics
The telecom boom
Regional powerhouse drives the digital age

With the exception of the region’s poorest and least technologically  developed countries, Internet uptake average in Eurasia is around 45%, and is growing rapidly. This is vital for the development of the region: as the global economy increasingly adapts to the information age, insufficient ICT development will lead not only to lost opportunities  for growth, but also to further economic marginalization and an overreliance on cheap labour and resources. Within the former Soviet Union cost remains a major barrier to Internet development: connection prices remain high relative to average income in the poorer countries of the region. However,  mobile outlets now provide a low-cost solution for the economically  disadvantaged. As a result, demand for mobile services has soared in recent years: mobile subscription rates have reached 180% in Russia and Kazakhstan, and exceed 100% across the region.

Internet uptake average in Eurasia is around 45%, and is growing rapidly

The demographic  profile of Internet users is very similar throughout Eurasia. The average  Internet user in post-Soviet Eurasia is young (under 35), university-educated, affluent enough to afford regular online access, and urban, with a large majority living in capital cities. Interestingly, the gender balance of Internet users varies depending on the country — for example,  male users outnumber female users in Azerbaijan, but the reverse is true in Belarus — but there are no extreme imbalances in any of the Eurasian nations.

In 2013,  based on data from the ITU’s 2014 report, Internet penetration  in the region reached an average of 44.17%; only Tajikistan and Kyrgyzstan lag significantly behind the regional norm, with 16% and 23% respectively. (See Table 1.) This represents an increase of 59% since 2010. The regional average compares with a penetration rate of 29.9% in the developing  world and 75.7% in the developed  world. 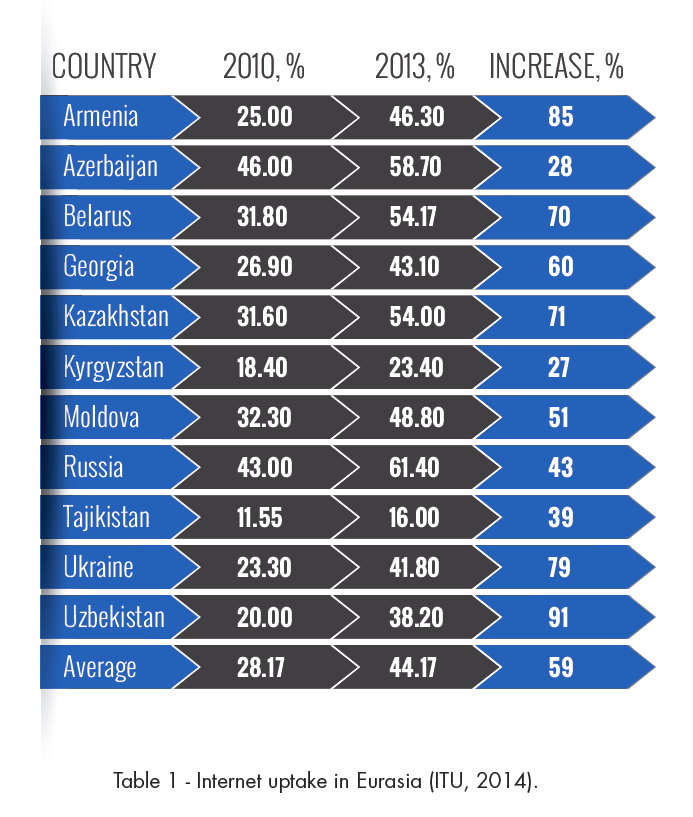 A regional trend of falling Internet tariffs has translated into growing online accessibility. However, due to economic inequality throughout the region, as well as geographical  challenges, fixed-line Internet access remains available only to a privileged few. As the world’s largest country, Russia faces significant geographic challenges in delivering  Internet access. As well, the mountainous regions of Tajikistan and Kyrgyzstan present particularly difficult challenges for fixed-line access; while Kyrgyzstan has devoted significant resources to addressing last-mile concerns, Tajikistan opted to utilize satellite-based connections to provide  access. Fast broadband  connections are relatively scarce in most countries, particularly Kyrgyzstan, Tajikistan, and Uzbekistan, with fixed telephone subscriptions dominating  the telecom markets. 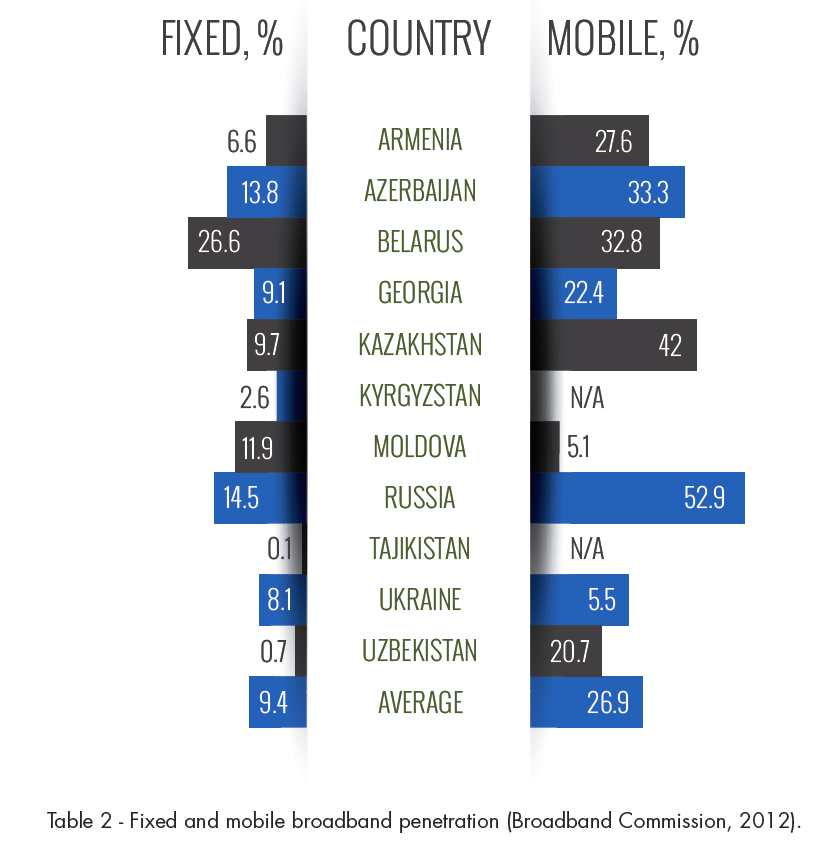 As noted, mobile subscription rates are substantially higher than those for fixed-line Internet access, with a regional average of approximately 120% — a figure that reflects the common practice of signing up for multiple subscriptions to take advantage of the benefits provided  by different providers.  (See Tables 2 and 3). As companies gradually enhance their technical capabilities and lower tariffs for data packages, mobile connectivity will continue to gain importance as a vital source of Internet access in the region.

Another popular way of accessing cyberspace is through the region’s many Internet cafes. Like Internet access in general, their distribution is concentrated in capital cities, where population density means greater profitability.  Users often see Internet cafes as a convenient way of going online, without the need to commit to a contract, an appealing option for those unable to afford Internet access at home. 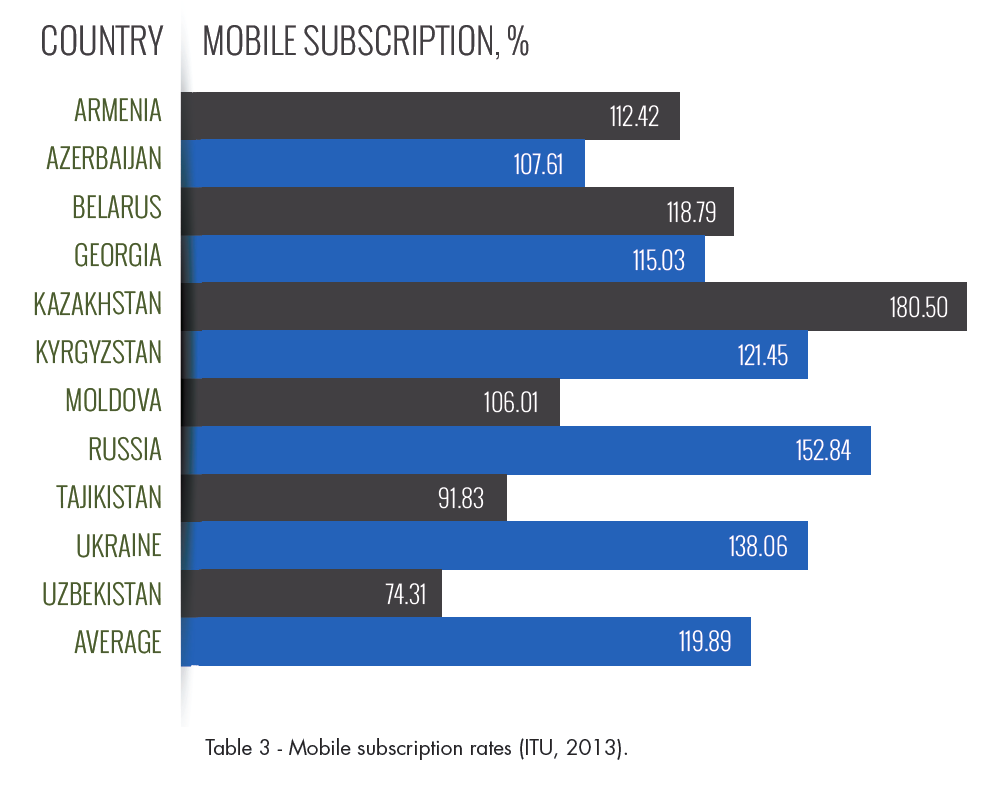 As noted, all forms of Internet access, from mobile to Internet cafes to fixed-line, are dominated by Russian telecom giants. Other competitors include TurkCell, Orange, Vodafone, and the Swedish-Finnish TeliaSonera. However,  the dominant position of the Russian companies  across the region  ensures the continued influence from Moscow in the field of ICT.